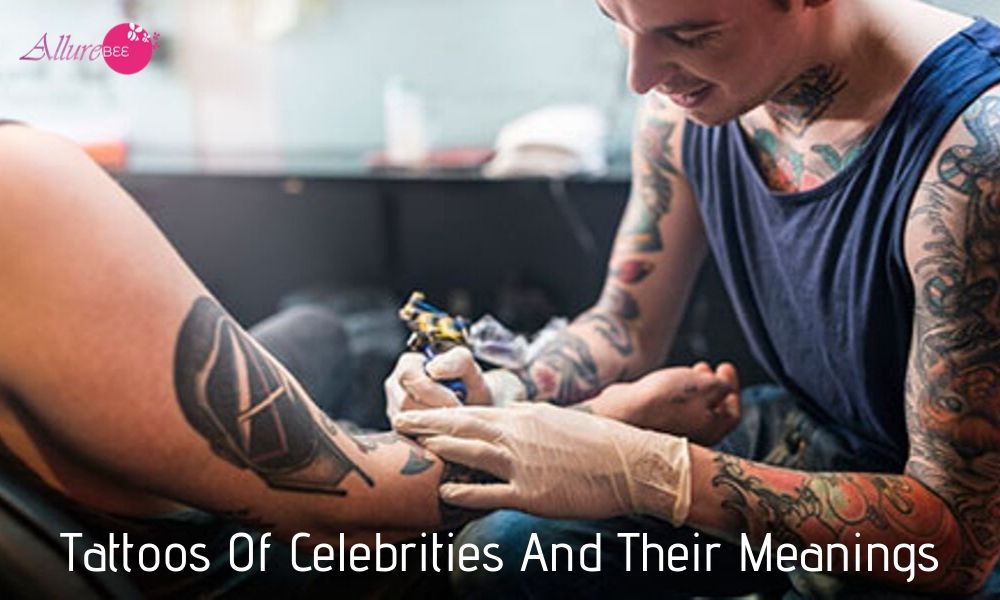 Tattoos are one of the ways to express your sentiments. And this is a trend of infamous celebrities too. Celebrities tattoo are a symbol of love for their family and friends. There’s always a sentimental reason behind a person’s permanent ink, and when you discover the secret, it’s exciting. Sometimes Celebrities tattoo-like to keep the meaning of their most personal tattoos on the low. But if you’re tired of guessing and want to know the truth, stick with us. However, we try to share the story behind every star’s tattoo. Have a look over celebrities tattoo and their meaning

She has a small outline Crescent Moon tattoo on her left side of her neck. This tattoo was a dedication to her favorite song “moonlight” which means a lot to her.

Johnny Depp is being of Hollywood’s greatest stars. He has a number 3 on his left hand. 3 is a sort of special number for him. It’s a very creative number. The triangle, trinity — you know, two people make another person. 3 is a mystical, magical number.”

She has got a tattoo on her right foot side, which reads “Norman” in a spot of very bold ink. She revealed that this tattoo was a token of tribute to her lovely dog, who has now passed away.

Bollywood actor Akshay Kumar has a tattoo of his son’s name Aarav on his back.

She has a “stay strong” tattoos. “Stay” on her left wrist, “Strong” on her right wrist” was a symbolic celebration of her successfully completing rehab in 2011.

Her mouse tattoo is a dedication to her younger sister, Natali, who was called “mouse” when they were growing up.

He is an English retired footballer. He has Jesus and cherubs tattoo inked on his upper left chest is styled to look like amen and three baby angles lifting Jesus from his tomb.

She is a Bollywood actress and former miss universe, Her life is a lesson in inspiration. Susmita’s tattoo Aut Viam Inveniam Aut Faciam have a meaning, I’ll either find a way or make one.

She has a tattoo that has a whole lot of meaning to her. This tattoo is a tribute to her Rainbow album and tour, but more than this it is about her wanting to “inject color into her life” and be truer to herself. Kesha also noted that it’s about the freedom to be yourself addressing how this is also a symbol for the LGBT community.

This tattoo mark a whopping 245 shows with her band tour. She chose her tattoos of the number 245 in gothic script on the back of her left arm by London-based tattoo artist madame Buraka.

Emma Stone and his mother got matching bird feet tattoos on their wrist to celebrate mama’s stone battle with breast cancer.

A tiny wrist tattoo symbolized the manifestation of spiritual beauty adding that she got the tattoo after she broke up with his famous ex.

The butterfly tattoo on Vanessa’s neck is symbolic of her name. She said a butterfly landed on my mum’s stomach a week before I was born and got my name. It is a Latin derivative because Vanessa means butterfly.

This Arabic tattoo means to love yourself first. This ink becomes the most famous on Selena.

A Canadian singer, songwriter Justin has 40 tattoos. He has got tattoo patience in the back of his left ear.

Bollywood actor Ranbir Kapoor has tattoo ‘Awara’ its meaning is carefree. This tattoo is dedicated to his grandfather for the movie Awara (1951).

Hollywood actress Emma Watson has got tattoo times up. This tattoo is corresponding with the hashtag which is against sexual harassment and was founded by Hollywood celebrities in response to # MeToo.

Bollywood actress Kangana has two tattoos. She got a Warrior Angle tattoo on her nape. This tattoo corresponding to her revolutionary personality in Bollywood.

She is an American singer, and songwriter, among her 8 known tattoos. katy has a tattoo in Sanskrit that says ‘Anuugacchati Pravaha’ which means ‘Go with the flow’.

Zayn is an English singer, and songwriter. He has more than 60 tattoos on his body. In which one of them being  Mandal art, just below Gigi’s eyes tattoo.

Indian cricketer, Kohli sports at least 8 tattoos. In which two of them are the golden dragon and a samurai warrior on his hands. These tattoos stand for strength, self-discipline, and self-constraint.

Meanwhile talking about Deepika Padukone’s tattoo  DP which signifies her name. Well, the story is somewhere very interesting behind this tattoo. Well DP is inked on her ankle which is the most painful place to get inked. Meanwhile, the story behind this tattoo is that she was working on her movie at that time she got her name inked on her ankle. Meanwhile, it’s said that the ankle is the hardest and most painful place to get inked. Once she told in her press meet that she loved her tattoo and is very lovely to see that tattoo.

Moreover talking about Saif’s tattoo then it’s his wife’s name on her hand. Well, the story of his tattoo is that when he started dating Kareena Kapoor in 2008. At a press conference, Saif announced that the tattoo on his hand signifies the love to his wife Kareena and the biggest commitment when we started dating. The reaction of his wife Kareena was amazing and she loved the tattoo. Meanwhile, she also shares her son Taimur’s reaction on social media and even at press meets. Saif said it was all inspired by David Beckham’s tattoo which signifies the love and care of his wife.